The ‘war on drugs’ is causing great damage 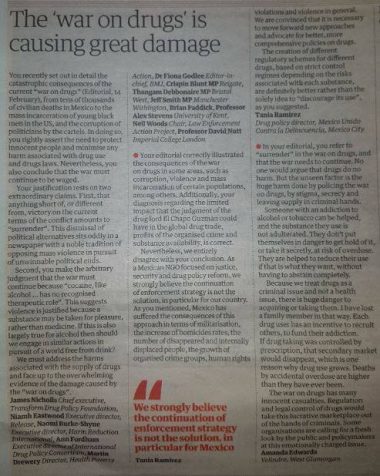 You recently set out in detail the catastrophic consequences of the current “war on drugs” (Editorial, 14 February), from tens of thousands of civilian deaths in Mexico to the mass incarceration of young black men in the US, and the corruption of politicians by the cartels. In doing so, you rightly assert the need to protect innocent people and minimise any harm associated with drug use and drugs laws. Nevertheless, you also conclude that the war must continue to be waged.

Your justification rests on two extraordinary claims. First, that anything short of, or different from, victory on the current terms of the conflict amounts to “surrender”. This dismissal of political alternatives sits oddly in a newspaper with a noble tradition of opposing mass violence in pursuit of unwinnable political ends.

Second, you make the arbitrary judgment that the war must continue because “cocaine, like alcohol … has no recognised therapeutic role”. This suggests violence is justified because a substance may be taken for pleasure, rather than medicine. If, as you say, this is also largely true for alcohol then should we engage in similar actions in pursuit of a world free from drink?

We must address the harms associated with the supply of drugs and face up to the overwhelming evidence of the damage caused by the “war on drugs”.

• Your editorial correctly illustrated the consequences of the war on drugs in some areas, such as corruption, violence and mass incarceration of certain populations, among others. Additionally, your diagnosis regarding the limited impact that the judgment of the drug lord El Chapo Guzmán could have in the global drug trade, profits of the organised crime and substance availability, is correct.

Nevertheless, we entirely disagree with your conclusion. As a Mexican NGO focused on justice, security and drug policy reform, we strongly believe the continuation of enforcement strategy is not the solution, in particular for our country. As you mentioned, Mexico has suffered the consequences of this approach in terms of militarisation, the increase of homicides rates, the number of disappeared and internally displaced people, the growth of organised crime groups, human rights violations and violence in general. We are convinced that it is necessary to move forward new approaches and advocate for better, more humane and more comprehensive policies on drugs.

The creation of different regulatory schemes for different drugs, based on strict control regimes depending on the risks associated with each substance, are definitely better rather than the solely idea to “discourage its use”, as you suggested.